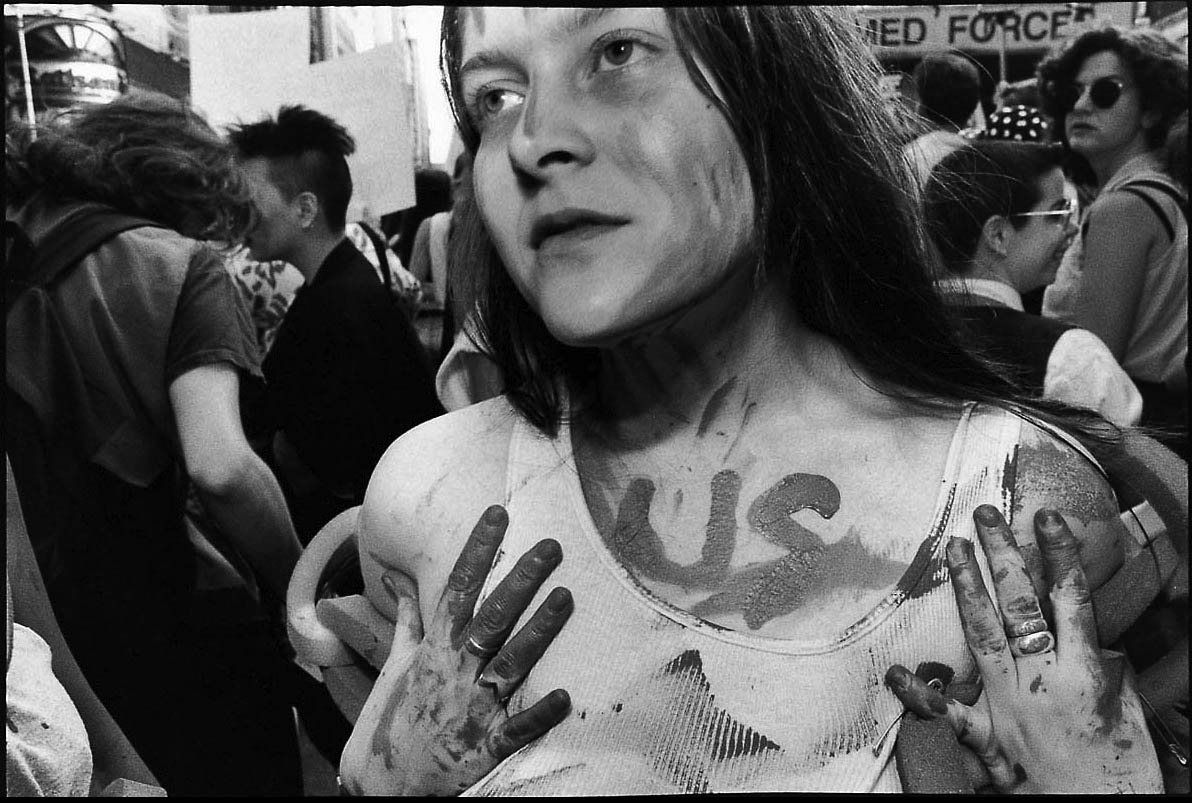 In isolation, collective action through body solidarity never looked so good. Intertwined bodies locked in resistance, fists raised, feet on the ground – these images push against our necessity of distancing as a means of mutual care. Pictures of protest serve as historical records that shape our memory of the political past and hold the potential to impact the policy of the present. What does it mean to look at these pictures in the shadow of our current reality? From the seminal show Whose Streets? Our Streets! New York 1980-2000 to the defiant viral anthem Un violador en tu camino / The Rapist Is You, created by Chilean feminist art collective Las Tesis, we will examine pictures made in protest and speak with photographers who document movements and revolutions. Panel created and moderated by Lesly Deschler Canossi, a photo educator and co-creator of Women Picturing Revolution. Panelists include Meg Handler, Editor at Large for Reading The Pictures, former editor of The Village Voice; Sheila Pree Bright, photographic artist and author of #1960Now: Photographs of Civil Rights Activist and Black Lives Matter Protest and photographer Wara Vargas Lara who has documented feminist focused protests in Santiago, Chile, La Paz, Bolivia, Washington D.C., USA. and is currently working on a project supported by National Geographic.

Attendees are encouraged to screen the streaming 18-minute documentary Whose Streets? Our Streets! New York 1980-2000 in advance of the event.

Sheila Pree Bright is an acclaimed fine-art photographer known for her photographic series Young Americans, Plastic Bodies, and Suburbia. She describes herself in the art world as a visual cultural producer portraying large-scale works that combine a wide-range knowledge of contemporary culture. Bright’s current and most ambitious project to date, #1960Now, examines race, gender and generational divides to raise awareness of millennial perspectives on civil and human rights. #1960Now is a photographic series of emerging young leaders affiliated with the Black Lives Matter movement. Bright’s work is in the book and exhibition Posing Beauty in African American Culture. Also, Bright’s photographs appeared in the 2014 feature-length documentary Through the Lens Darkly: Black Photographers and the Emergence of a People. Her has been exhibited at the High Museum of Art, Atlanta; Smithsonian National Museum of African American Museum, Washington, DC; The Museum of Contemporary Art, Cleveland; The Art Gallery of Hamilton, Ontario, Canada and the Leica Gallery in New York.

Lesly Deschler Canossi is a cultural producer, photographer and photo educator. She is faculty at the International Center of Photography and co-creator of Women Picturing Revolution. She holds an MFA from Maryland Institute College of Art and has taught at Columbia University, the Metropolitan Museum of Art and the Lamar Dodd School of Art in Cortona, Italy.  In 2016 Lesly along with independent curator and artist Zoraida Lopez-Diago created Women Picturing Revolution which surveys female-identifying lens-based artists who document war, conflicts, crises, and revolution in private realms and public spaces. Special focus is placed on the impact conflict has on women and girls. Most recently, Women Picturing Revolution presented at the Tate Modern on the topic of their forthcoming book Representations of Black Motherhood and Photography for Fast Forward: Women in Photography.

Meg Handler is Editor at Large for Reading The Pictures. She is the former photo editor of The Village Voice. Following The Voice, Meg worked at U.S. News & World Report, Blender, New York Magazine, COLORS and Polaris Images. She has edited a number of books, including the monograph, Phil Stern: A Life’s Work, PAPARAZZI by Peter Howe, and POT CULTURE by Shirley Halperin and Steve Bloom,  Mad World: An Oral History of New Wave Artists and Songs That Defined the 80’s, and DETROIT UNBROKEN DOWN by Dave Jordano. In 2017, Meg co-curated ‘Whose Streets? Our Streets! New York 1980-2000, which was shown at the Bronx Documentary Center and continues to travel. After 20 years of immersion in the photography business, and having worked with some of the great photographers in New York and abroad, Meg now lives in Chicago. Meg received a Bachelor of Fine Arts in Photography from The Rochester Institute of Technology.