The story of the Obama presidency through Pete Souza’s photos

I saw the headline in FStoppers, “White House Photographer Releases Favorite Images of Obama Through His Presidency,” and got a little excited. Hey, I thought, that will make a great blog post.

Think about it: Official White House Photographer Pete Souza estimates he has taken upwards of 2 million photos on the job over the last eight years (the White House flickr account has nearly 7,000 images on it). How agonizing would it be for Souza to pick the 55 images that were his favorites? And what kind of story of the Obama presidency would those 55 images tell?

Alas, a closer read of the article shows it doesn’t really make it clear that Souza released anything. It cites a recent NPR article, but that interview doesn’t mention anything about Souza releasing a set of his favorite images. A quick Google search of recent articles about Souza found some in the British press saying Souza had released his “55 favorite images,” as well. Those articles cite a website called Twisted Sifter as the source. 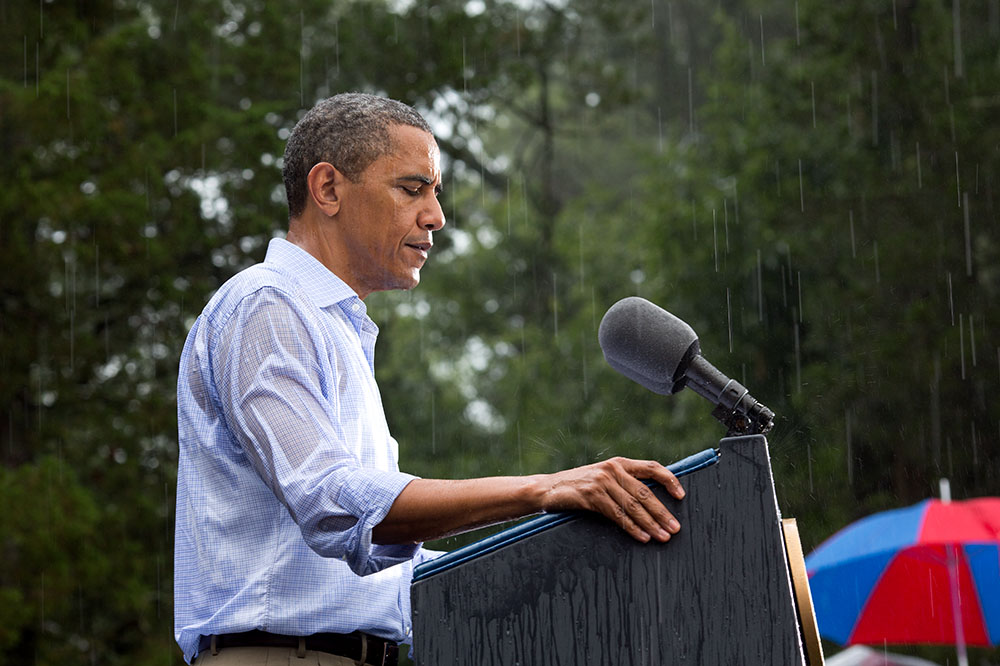 But if you actually read Twisted Sifter, you’ll learn that the 55 photos are the blogger’s favorite images, not Souza’s, despite the misleading headline. (I cry over the state of “journalism” today.)

All of that, of course, is besides my actual point, which is how formidable of a task it would be to mull through a gazillion images to come up with a small set that tell a story.

You’re unlikely to ever take 2 million photos of any one subject in your lifetime but you very likely will go on a week-long trip and come back with hundreds or thousands of images. If you’re going to blog about the trip, which 10 to 20 images do you pick?

Since I don’t have the time or energy to go through the 6,664 images on the White House flickr account, I’ll limit my choices to the 55 images that Twisted Sifter curated. Which are the five I would pick to tell the story of the Obama presidency?

First, I’d want a cover image that is not only one of the best photos of the 55 but tells the story that I want to build. What is that story? Is it hope? Change? Frustration? Success? Failure?

I think Souza’s photos do a remarkable job of showing this president as “human,” as someone with a great sense of humor who is as at ease with foreign heads of state as he is with the average, random person on the street. I don’t know if that’s actually true, but the photos tell that story.

I thought about choosing the image of Obama leading a civil rights commemoration march with hundreds of people behind him. To  me that image could be read as Obama being “the people’s president.” But I didn’t choose it for three reasons 1) I wanted an image where Obama was the main focus 2) I wanted to remove politics from the image. 3) It was actually taken by Lawrence Jackson. Oops. I also found that another photo I wanted in my top five — the one of the president and his wife at the Lincoln Memorial — was taken by someone other than Souza.

Instead, I went wth the photo of Obama stretched out on the floor of the Oval Office holding a child in the air. The scene immediately humanizes him and really just shows how comfortable he is in his own skin. For the next image, I picked the one with Obama in the rain at a campaign event. Former presidents and people close to them often talk about how being president puts you on an island, how it’s lonely at the top. I thought this image captured that feeling, while also continuing my theme.

Now, I’m at a pivotal point in my story. Do I go with another image of Obama with a child in the White House? There are some good ones, and it is a consistent theme in Souza’s photography, but that might be too redundant and could tilt my story towards one about Obama’s ability to relate to kids. Since my second image was of him by himself, I want this third image to include Michelle and, maybe, their children. His role as husband and father is strong part of my story. Unfortunately, the choices don’t include any of the first family, so I will go with the President and First Lady, settling in to watch a 3D movie in the White House screening room. It’s just an awesome image that captures my theme of the President as just a regular dude.

I usually like to include at least one detail shot in a story. But the choices are somewhat limited among Twisted Sifter’s gallery.  There is one, however, that I love — it shows the President sitting on his desk. Well, not the President, just his legs and shoes.

And that brings me to the closing image. This shouldn’t be considered the “fifth best” image, it’s the 2nd most important image of the story behind the lead image. It’s my kicker, the one that sums things up and puts a bow on it. There’s really a couple ways I can go here. I can pick the image of Obama and Michelle boarding Air Force One, it’s the ultimate farewell shot but it doesn’t really fit into my theme. I love the images of the President in an elevator removing (he could be putting it on) his bow tie. He’s got a huge smile on his face and he’s saying, “My job here is done.” The one of the President in silhouette in the rain is striking but it evokes a little sadness in my mind and that’s not how I want to end this story.

I’m choosing the image of him running down the hallway with his dog, Bo. Whether you are Democrat, Republican or Independent, you can immediately relate. It captures my theme and makes me imagine the President running off into the sunset with his best bud.

That’s my story and I’m sticking with it.

Are these the five “best” of the 55 I had to choose from? No. But then, my 55 photos would have been completely different than the ones I had to choose from. Visual storytelling is choosing images that complement each other, advance your theme and come together in a cohesive, compelling way.

What would you have done differently?