Nighttrippers: The District After Dark

Nana Gyesie, a street photographer based in the Washington, D.C. area, has been documenting night scenes in the District for the past two years. His project offers an unfiltered look at the exuberance (some might call it hubris) and passions of the mostly young people who bring the night to life.

Together, the images tell a story of the disparate forces that converge in the city’s nightlife scene — the energy, the boredom, the sexual tension.

Gyesie, who is almost never seen without his Fuji around his neck, plans to publish his work in a forthcoming book to be called “Nighttrippers.”

Focus on the Story: What inspired you to undertake this project?

Nana Gyesie: In 2013, I chanced upon a magnificent photography project by a British-based Polish photographer named Maciej Dakowicz. It was a colorful expose of nightlife in the Welsh capital titled ‘Cardiff After Dark’. I was immediately struck by the sociological yet lighthearted humorous approach to capturing street action after hours. I thought to myself, I can do this in Washington DC. I wrote to Maciej via Facebook to give him a brief overview of my project because I believe in giving full attribution to one’s influences, even though Picasso suggested that great artists might steal from other’s ideas. From this spurned my own series titled ‘Nighttrippers’ in 2014.

FOTS: Did you have a vision of what you wanted to accomplish and how to go about achieving it when you started the project?

NG: I decided to set the series around the nightlife spots in Washington DC to include Connecticut Avenue, H Street NE, Adams Morgan, the U Street Corridor and other parts of the city. My vision was to showcase a different side of Washington DC with absolute dignity. And also to provide a different perspective on life here away from the monuments, navy blue suits, red ties, pearl necklaces, ferragamo shoes, happy hours, college sweatshirts, brunch and other subtle markers of social class and the lack thereof in this city and the wider DC metro area I have come to love and call a second home. 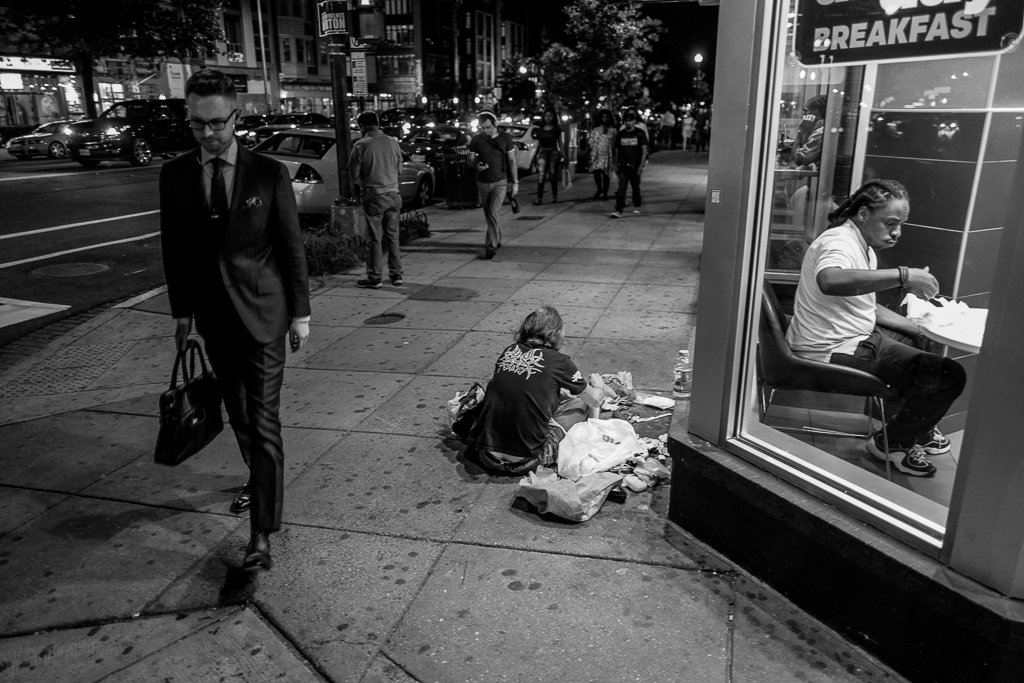 FOTS: Did you have a fear that you might be too heavily influenced by what you had seen in Maciej’s work?

NG: To differentiate myself from Maciej, I decided to shoot entirely in monochrome. At first, I photographed in color and then converted to black and white during my post processing.  As I progressed with the series, I set my camera to monochrome as I trained myself to see nightlife in black and white.

My goal was always to photograph them with integrity and to tell a coherent story of people seeking human connections in the dark of the night. 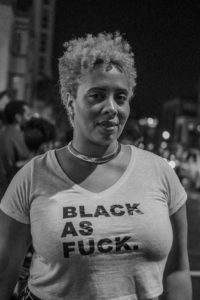 FOTS: Would you describe this work as “street photography” or more documentary style?

NG: The series includes a mix of candid street photography and street portraits. In many cases, I interacted with the subjects I photographed, and sometimes not. My goal was always to photograph them with integrity and to tell a coherent story of people seeking human connections in the dark of the night.

FOTS: What lessons have you taken away from your time working on this project?

NG: In regards to photography, most of my shots were photographed without flash. Night time photographs require a different kind of perspective on using light. It helped me push my creativity a la Maciej and Daido Moriyama. The project also gave me an appreciation of light and dark. Darkness is another form of light and brings out a different kind of inner urge that we all have. Ultimately, everyone wants to be validated–whether they hide behind $400 designer headphones on urban sidewalks or loosen up their inhibitions with a mixologist’s fine recipe after dark.